GCP’s Cloud Run is a great case study for (almost) all the things you want and need when it comes to developing containerized apps in a comprehensive way. Let’s break out our running shoes for this hype hill.

I was recently asked for a solution to flatten (i.e. reduce all objects to a single layer) PDF files before selling them online. This is often required by the licenses of the included art assets to make extraction harder. Commercial PDF apps can do that for you but why bother when you can tap into the power of the Open Source?

After fumbling with command line arguments, I found a combination of ImageMagick and PDFtk that would flatten the pages and, as a bonus, set the meta data fields to disable certain PDF features like copying. Which really isn’t too valuable as it is up to the PDF reader to honor this.

The downside of this solution is that you have to install some packages and use the command line, which is too complicated for the end user. But installing the stuff and wrapping a web application around it is very easy to do in a Docker container.

And how could you easily run that container in a serverless fashion? With Cloud Run, doh!

Here’s a Dockerfile that installs ImageMagick, PDFtk and node.js on a CentOS 7 image:

You can find the latest code on Github.

Your expert eyes probably got stuck on the first line. marketplace.gcr.io/google/centos7 is the managed CentOS image from Google. You want someone to take care of those so-called base images for you. In this case, we trust Google to update this image in a timely fashion (and we can blame them if our app got hacked). And thus, we unlock:

To be able to pull this image locally, you need to authenticate Docker with GCP’s Container Registry:

Setting up Cloud Build and Run

In the Github repo, you’ll find instructions to set up a new GCP project from scratch that is enabled for all the features we use. That’s still a surprisingly involved process on the command line, especially when configuring IAM, where you need to figure out the correct service accounts.

A better solution would be to configure GCP with Terraform. Edit: That’s available now.

We want our builds standardized and repeatable, so we let Cloud Build do the work:

Cloud Build performs a series of steps which each run in a specialized build container referenced by name. In this case, we use stock images from GCP to build, push and deploy our Docker image. We make use of substitutions to separate configuration values from the build instructions. Custom variables must awkwardly begin with an underscore to distinguish them from built-in variables like $PROJECT_ID.

As you’d expect from a contemporary build tool, you can configure source code changes to trigger the build.

One way or the other, the output of a successful build job looks like this:

You might wonder why there’s a redundant image push in the above output. That’s the result of specifying the images field in cloudbuild.yaml, which, according to the docs, has the added benefit of showing the resulting image as a build artifact in the job history. If we didn’t need an explicit step to push the image (so that is available when we deploy it in the next step), the images field would suffice to make sure that your image is stored in the Container Registry.

By deploying the Cloud Run app with the argument --allow-unauthenticated, it can be invoked via the randomly picked URL from the build output above (i.e. https://pdfdist-something-uc.a.run.app).

As you’d expect from any container platform, process output is fed into a logging service. When the app emits structured JSON, it will be parsed for you automatically. 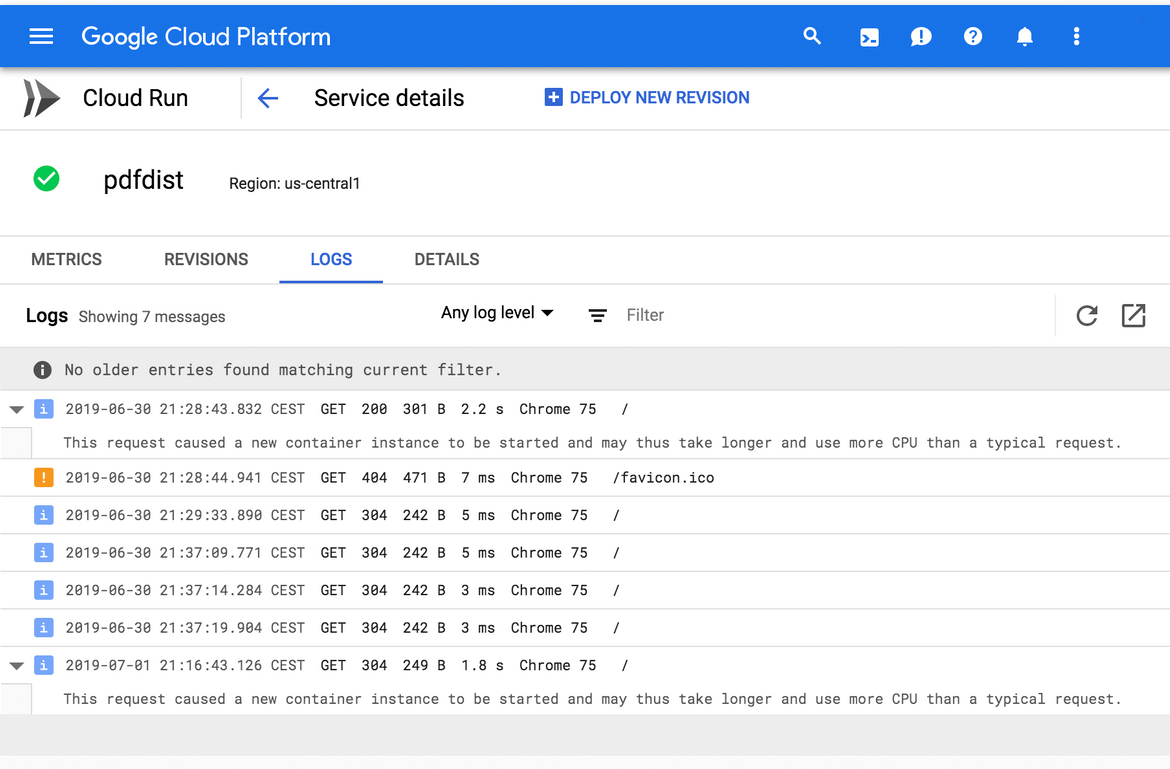 In the image above you can also see some GCP system logs, e.g. one line telling us that the container served the request from a cold start in 2.2 seconds.

GCP’s Stackdriver automatically gathers metrics about your Cloud Run apps and let’s you set alerts. When you fully integrate Stackdriver into your app, e.g. via OpenCensus, you’d gain the ability to trace requests and emit custom metrics. I might check that out in a future post.

Bring your own domain with HTTPS

You can verify your domain to be used by Cloud Run and this can be done via the command line. Cloud Run is also handling SSL certificates, which is nice.

🏆 Easily use your own domain with SSL.

You can rely on asynchronous vulnerability scanning of your images, as described here.

On the plus side, Cloud Run is super close to a comprehensive, Serverless 2.0 solution:

You could stumble over a few things though:

Yes it is coming. Our goal is to implement the knative/serving API.

Of course, you typically consider containers as stateless and their storage as ephemeral, no matter what platform you use. Still, the idea of “it’s always memory” can make you think in the wrong direction - at least that’s what’s happened to me.

Checking the pulse after our Cloud Run

There’s a lot to like about Cloud Run and that’s why I mentioned it prominently when discussing how to build and run containerized apps in 2020 and beyond. I would even go as far as declaring it as the most comprehensive Serverless 2.0 (i.e. auto-scaling, container-based) solution out there right now.

Cloud Run is still in beta and of course it works best when you make use of all the adjacent GCP services, like Container Registry, Cloud Build and Stackdriver. So there are reasons why you won’t use it now, or ever. Still, I’d encourage you to try it out, because it can help you to explain how a Serverless 2.0 solution - one that you can actually deploy at your company - should work.

What are your thoughts on Cloud Run ? Does it embody the things you want so see in a Serverless 2.0 offering? What is missing?

Let me know your thoughts on Twitter or Linkedin.

Big thanks to @steren for reviewing the post and providing valuable comments.

“runner” by Aarni Heiskanen is licensed under CC BY 2.0

Today, you’d expect a drastic improvement of the whole experience from building your first Docker image to running it in a stable, fully…